Boyd Boiling Under the Podium Surface 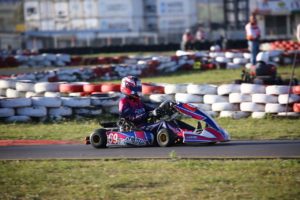 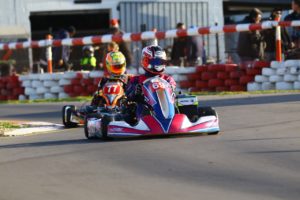 Boiling just under the checkered flag surface is a young talent who has quietly stitched together an extremely impressive season. Sebastian Boyd sits third overall in the National standings in one of the most competitive racing classes in South African motorsport as a whole, let alone karting.

This is only his second year in the premier Rotax series that we know and love – DD2. These karts are capable of well over 120km/h and are especially capable of doing it through the apex. Truly impressive stuff.

As he suited up for the 6th round of the WPMC Regional Karting Championship this past weekend, Boyd would have been focused on putting in a solid result to try better his current position of fourth overall in the regional standings. It tells you something about the strength of DD2 at Killarney that you can be third in the National standings but fourth in the Regional standings…

After struggling with brake issues in Friday’s free practice sessions, the Boyd Boss Freight Team worked their usual magic to get the kart ready for qualifying. After an intense qualifying session, Boyd had to settle for P4 as just 0.25s covered the top 4.

Race 1 was a tremendous effort from Boyd, promoting himself from P4 to P2 by the time the checkered flag was waved. A fantastic battle with talented rival Jason Coetzee was the highlight of the latter stages of the race.

With a front row start in Race 2, Boyd shot around the outside of Coetzee to take the lead. With empty track in front of him, Boyd’s carburettor decided that it simply wasn’t as excited about the prospect of a win as the young driver was. A long and painful session ensued with Boyd eventually bringing his wounded kart home in P4.

After a highly disappointing outcome to Race 2, Boyd started the final race of the day from the second row. Although a tight battle looked like it was on the menu, Boyd suffered grip issues and could only manage P4.

Several times this year, Boyd has shown the pace necessary to be a championship contender. Although he had to settle for P4 overall for the day, one cannot help but feel that his ship will come in soon enough. If karts had side mirrors, the current leaders would be watching them nervously for signs of Boyd’s Kosmic nosecone.

A podium Championship finish is still in play with just two rounds left. On September 14th, Boyd will be back to fight for the flag.