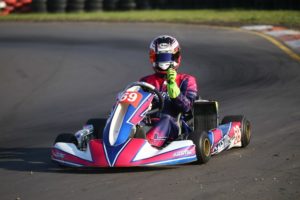 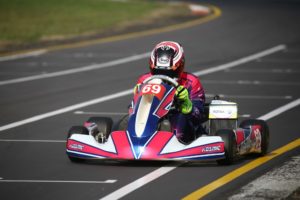 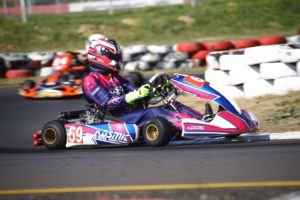 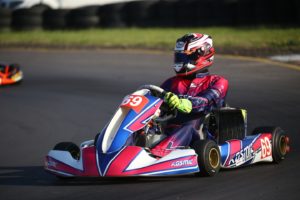 The road to the checkered flag in karting is an exceptionally challenging one. The racing is close and competition is fierce. This is what karting is famous for and this is exactly what keeps people coming back week after week for practice.

Sebastian Boyd’s short time in DD2 has been extremely impressive. His calmly confident demeanour off the track is reflective of the cool head he keeps on the track.

His performance at the 5th round of the WPMC Karting Championship was one he will remember for some time as his continued fight for pace paid dividends.

With rain lashing the Western Cape in the week before race day and misty conditions on Saturday morning, a few drivers would have been scratching in the cupboard for wet tyres, just in case. Luckily, it was a slippery practice rather than a wet one.

Boyd pulled off his finest qualifying performance of the season, claiming P2 a mere 0.077s behind pole man Jason Coetzee.

In Race 1, Seb dropped to P4 in the opening exchanges as the top four jostled for position into turn 1. Calm and collected as always, Boyd fought his way back up to P3 before Coetzee got the better of him and relegated him to P4. Eventually Boyd managed to get back to P3 where he finished an eventful first heat.

Race 2 was less dramatic, as Seb moved from P3 to P2 at the start. He held on to P2 for the duration of the race and put in an extremely consistent performance.

Race 3 was the crowd-pleaser, as it so often is. DD2 was the last race of the day and played out to a packed grandstand. Any of the top five drivers have a shot at victory and Seb knew a strong finish to the day would secure him a fantastic overall result. After losing out at the start and finding himself at the back of the pack of wolves, he fought back to P3 as the photographers made the most of low-light conditions to snap photos of five drivers in the same frame.

A nose cone penalty for Coetzee promoted Boyd to P2 on the results sheet, which was also his overall finish for the day. This was the closest Boyd has come to victory and it would be foolish to bet against the youngster standing on the top step soon.

The Boyd Boss Freight team made huge strides this weekend and will be brimming with confidence as they head into the epic iDube National in two weeks’ time.