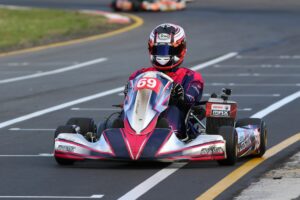 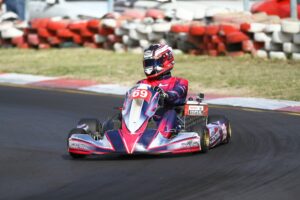 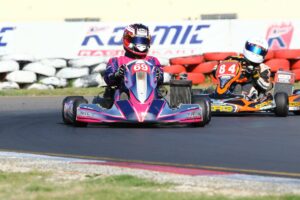 A young man of few words, Sebastian Boyd lets his kart performances do most of the talking.

On the 18th of May 2019, his audience was the Killarney karting faithful. Seb’s Rotax DD2 class ran with the DD2 Masters as usual, creating a spectacle of 13 screaming DD2s on the tarmac.

As the fastest and most physical Rotax class, these karts are essentially mechanical bulls that must be tamed over the 1km Killarney karting track which is both fast and technical.

Top drivers never stop preparing for a race weekend, with a consistent and demanding practice schedule that requires serious commitment. However, Friday practice is where drivers get to gauge where they are against the rest of the field.

“Friday practice we were struggling quite a lot – about 0.4 seconds off the pace,” he explained.

To be fair, the pace upfront was rapid. With cooler conditions heading into winter and cloudy weather with no rain, lap times in the low 40s were the order of the day.

Horsepower-friendly conditions continued into Saturday as the drivers lined up for qualifying. Team boss and proud father Warren Boyd, along with head mechanic Trevor Bennett, had put in the hard graft overnight. The brains trust is completed by Claudio Piazza-Museo, Seb’s driver coach.

The lights went out for race 1 and Seb emerged out of turn 1 in P2 ahead of Stermin. Boyd stayed with Coetzee during the opening exchanges, before losing out to Stermin who in turn suffered mechanical issues and retired from the race. Boyd came home in P2, banking valuable championship points. Race 2 was a solid and steady performance, where Seb held station in P3. More points in the bag.

With two solid finishes in the bank, the team decided to switch things up with some setup changes to the number 69 Boyd Boss Freight Kosmic for race 3.

The changes worked. Gains of a couple of tenths of a second per lap may not sound like much if you haven’t experienced racing at the sharp end of the field, but it takes an immense effort to squeeze out that extra pace.

Boyd survived turn 1 in P3 and proceeded to work his way up to the lead where he stayed for a few laps before dropping back to P2 where he finished.

With P2 overall for the day, Seb kept the championship fight alive in arguably the most competitive DD2 regional class in the country, where the fight at the front could easily be replicated in any of the Nationals. The battle with Coetzee, Stermin, Jonathan Thomas and Jarryd Evans slightly further back on pace continues to thrill Killarney’s karting fans.

Seb concluded, “Overall it wasn’t a bad day – we learnt a lot and closed the gap to the front a bit, but a lot of hard work is needed for our next National round in Durban.”

The Durban National is only in August, with a couple more rounds of the WPMC Regional Championship taking place before then. Seb’s next race will be on 15th June, where he battles it out against his Cape Town rivals.