BOYD SHOWS WINNING POTENTIAL “IT WAS A REALLY CLOSE FINISH” 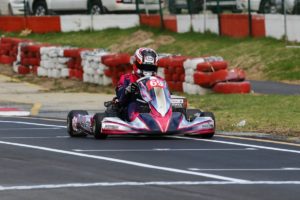 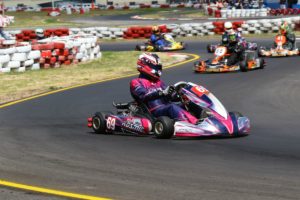 For those who managed to get a glimpse into the ever-attractive Boyd Boss Freight stable on Friday evening, the air of tension surrounding the team would have been tangible.

Most concerned were star driver Sebastian Boyd and his father Warren, after battling with an engine misfire for most of the afternoon’s free practice sessions.

This is very far from the ideal situation to be in before an important regional race.

The car that gets you to the shops and back during the week might be able to survive with an engine performing below its peak, but in karting where every hundredth of a second counts, the issue needs to be diagnosed and corrected urgently.

As the wind picked up in Cape Town on Friday evening and the sun disappeared below the horizon, the team thought they had found the source of the misfire. As Saturday dawned, so too dawned the unfortunate realisation that the problem was persisting.

Team boss Warren Boyd remained as cool as ever. As he successfully managed to avoid any personal misfires, a well-considered action plan was put into place with an electrical overhaul.

Result! Seb’s kart was sorted and firing on all one cylinder, which is all the power it needs to propel the young racing driver to over 125km/h on Killarney’s karting circuit.

A strong showing in race 1 saw Boyd running in 3rd and 4th for most of the race, before an incident during the closing stages saw him limp over the finish line with a bent tie-rod and steering column in P5.

Some sharp work in the Boyd Boss pit prepared Seb’s kart for race 2, which he tackled in superb fashion.

After starting in P3, Seb found himself in P7 after a rough first lap. An overtaking extravaganza followed, fighting his way back to P3 in a standout drive in this competitive category.

Father Warren watched on proudly from his designated spot next to grid marshal Michelle as Seb came home in third. More importantly, Seb demonstrated serious race-winning pace as he lapped consistently in the mid 41s.

If race 2 was one of Seb’s standout performances, race 3 was the culmination of a huge effort from the team throughout the weekend. After struggling initially, Seb held off an early attack from Jarryd Evans. With P3 secured, he went about chasing down Jonathan Thomas and Jason Coetzee in the battle for top spot.

Although he had to settle for P3, he took great heart from only four tenths of a second separating the top three drivers.

“We had a difficult start to race 3 as the track conditions cooled. I struggled initially, fighting to hold off pressure from Jarryd Evans, but managed to hold onto Jonathan and Jason up ahead. Having broken from Evans I caught the front two and it was extremely close all the way to the end” concluded Boyd after a great effort in race 3.

Having demonstrated the pace needed to win and a team foundation capable of withstanding the challenges of motorsport, the Boyd Boss Freight camp will be feeling extremely bullish about the rest of the DD2 season as they chase down victory.