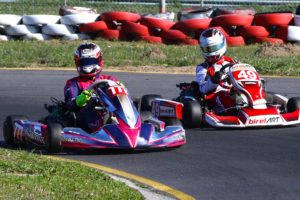 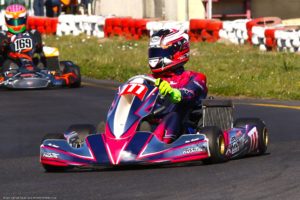 Cape Town young gun Sebastian Boyd enjoyed a challenging if ultimately encouraging weekend at Cape Town’s third round SA national Rotax Max Challenge races at Killarney on Saturday. SACS College Grade 10 schoolboy Seb ended up seventh on the day in the open age group DD2 class, to move up a position to seventh in the championship too, as he retained his position as the best of the rookies in a class dominated by the cream of South African motorsport.
“I’m pretty happy with how my home national went,” Sebastian confirmed “Qualifying went well – started sixth, but we struggled for pace in the first heat and really had to fight for tenth. “The second race was a little better and I managed 8th and the Final was another small step forward – I finished up sixth on the road to come home seventh overall on a pretty tough day in DD2 with quite a few accidents and incidents, but we kept out of trouble and managed a good points haul.
“I am also now up to seventh in the championship and best of the rookies in the class, which is pretty cool considering some of the guys who race here are proven to be the best in SA at all levels, so I suppose we have quite a bit to be happy about. “We have another two regionals next before the national Final up at Zwartkops at the end of September and the aim is to carry on keeping my nose clean and scoring good points to be the best rookie of the year. “Bring it on!”