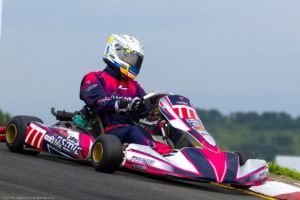 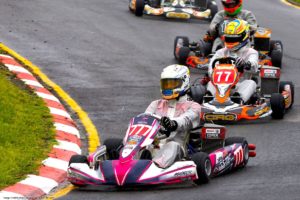 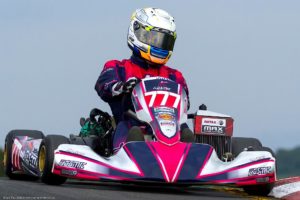 Camps Bay Cape Town kart racer Sebastian Boyd came home satisfied with a top ten finish following a dramatic debut iDube Rotax Max DD2 national championship season opener in the KwaZulu-Natal Midlands aboard his Boyd Boss freight Kosmic. SACS College Grade 10 learner Boyd kept out of trouble amid a star-studded 34-kart field in changeable conditions to emerge ninth overall to get his national campaign off to a solid start.
“We had very good pace in the dry in Friday practice, but it was raining on and off on Saturday and that changed everything as we were continually chasing the best set-up,” Sebastian reported. “I had a great opening heat and I was up to fourth but I ended up 6th after a tussle with Luke Herring and Daniel Duminy. “We never quite hit the right set-up for race 2 and I found myself chasing my home rival Jason Coetzee home to 12th.
I started 11th in the Final but dropped to 19th after a wild opening lap, so I put my head down and fought back to 12th and I was happy to end up in the top ten overall after a fraught day at the races.” Sebastian now heads home for the third round of the Western Province karting championship at Killarney this coming Saturday 7 April.